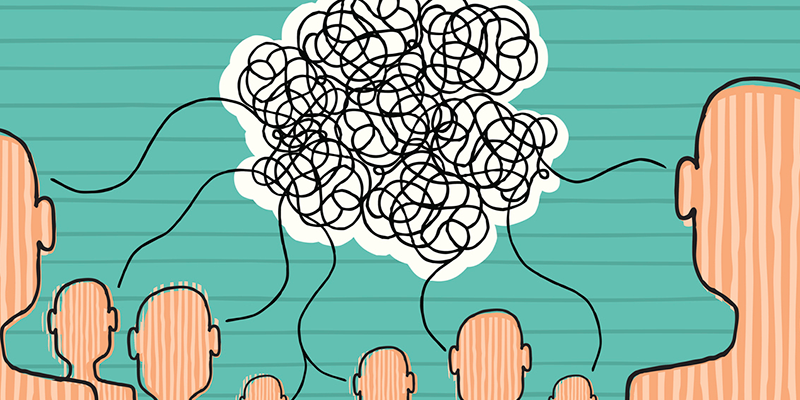 For me, feedback has always been about inclusion and equity, though I realize that the link is not always clear – or automatic. So as I step back from my day-to-day duties as CEO of Feedback Labs, I would like to reflect on the question of how feedback in aid and philanthropy can amplify the voices – and power – of those excluded from equal participation in the decisions that affect their lives.

When I started my career in international aid 35 years ago, the vast majority of people in developing countries had little say in how they were governed. They had even less to say about the programs funded by foundations and aid agencies.

Democracy has spread rapidly since then – even if it still often works poorly. From a historical perspective, the idea that regular people should have a real say, backed by a real vote, in what happens to them is revolutionary. We should celebrate it, even as we press to make democracies work better.

Over time, people and governments have begun to realize that democracy (for all its messiness) is not only the right thing to do morally; it’s also the smart thing economically. The emergence of democracy is closely correlated with an astounding rise in human welfare over the past two centuries. In their landmark book Why Nations Fail, Daron Acemoglu and James Robinson examined centuries of evidence and concluded that prosperity was “spurred and sustained” only in nations where “the government became accountable and responsive to citizens and the great mass of people.”

Why shouldn’t we apply the same logic to programs funded by aid agencies and foundations? That question is what united the groups that came together five years ago to create Feedback Labs. The march of democracy shines a beacon of hope for justice and equality before the law – and these groups felt that beacon of hope should also light the path ahead for aid and philanthropy.

Most democracies have a great deal of unfinished business when it comes to inclusion and equity. By learning from democracy’s imperfect history, we can accelerate the way in which feedback enhances equity and inclusion in aid and philanthropy.

The 1776 Declaration of Independence by thirteen North American colonies proclaimed:

We hold these truths to be self-evident, that all men are created equal, that they are endowed by their Creator with certain unalienable Rights, that among these are Life, Liberty and the pursuit of Happiness…Governments are instituted among Men, deriving their just powers from the consent of the governed.

This Declaration was followed, thirteen years later, by the U.S. Constitution, which emphasized the “We the people…” This Constitution was based on the idea that the power of government derives not from a king or an elite class, but from the people themselves. Two years later, a Bill of Rights amended the Constitution to enshrine certain liberties of individuals to express themselves and be free from coercion. Those amendments, along with others passed since then, served to prevent the government, or even a majority of voters, from infringing on certain basic rights and dignities of people.

That newly independent country’s soaring ideals set the stage for unparalleled economic and social progress over the next two centuries, with incomes and living standards rising faster than ever in human history. Yet those ideals set also standard that the country itself failed – glaringly at times – to live up to.

As Jill Lepore notes in her new book These Truths: A History of the United States, up to fifty million native Americans had already died from the diseases brought by Europeans by the time the United States declared independence in 1776. Many more were forcibly displaced to reservations. Nearly twelve million Africans had been forcibly brought to the U.S.; most were enslaved on arrival. All of the signers of the Declaration were white men, most wealthy landowners. Many in the elite class at the time wanted the colonies to be free from their overlords in England – but they did not want to change how the elite in their newly independent states governed the underclasses.

These realities were reflected in the compromises made under the pathbreaking new Constitution: slaves, native Americans, women, and illiterate and landless white men were all denied the right to vote in most states. Adding insult to injury, these groups were explicitly or implicitly excluded from the other privileges and protections offered by the Bill of Rights.

The history of the last two centuries has been the struggle to address these injustices, extending full rights to all citizens.

In other words: the last 200 years have been a struggle for inclusion and equity.

This struggle has been marked by a pattern of “two steps forward, one step back,” with those in power trying to undermine and reverse progress at every stage. Though blacks were formally freed from slavery in 1865, there would be 100 more years to come of formal and informal laws restricting their full rights. Even illiterate and poor whites were excluded from voting for many years by literacy tests, poll taxes, and other measures. It took until 1920 for women to gain the right to vote, but many women weren’t allowed to establish their own bank accounts and credit cards into the 1970s.

Despite their hard-won constitutional and legal equality, people of color still suffer from both explicit and implicit biases and prejudices that keep them from equal opportunities to lead and have their voices heard. Though black households have made steady progress in terms of household income and educational attainment, they still on average hold less than a tenth of the assets of white households. Many native Americans still live with murky rights over the lands and their lives. Though women are gradually making their way into the inner sanctum of government and the private sector, they remain grossly under-represented in most institutions. The severity and frequency of sexual harassment and even exploitation women face is only now emerging exploding into public awareness. People of different sexual orientations and gender identities have made progress at the legal and even constitutional levels, but their dignity continues to be challenged in the courts, on the streets, and in the workplace.

This is where feedback can make the difference at a societal level.

Even as we make progress on inclusion and equity at a legal level, feedback can elucidate where informal biases, prejudices, and injustices continue to exclude people from their full rights to “life, liberty, and the pursuit of happiness.”

Even as we resist efforts to suppress the votes of some marginalized groups, many people still don’t believe that our elected governments “listen” very well. Feedback can help them keep governments more accountable and responsive between elections. People increasingly want to be part of the process of creating and proposing new ideas themselves – not only responding to ideas and programs proposed by their elected representatives.

Involving people early and often is key. Feedback must not be solicited only after the details of a program are finalized and implementation is under way: Did you like this?

Leaders need to ask people up front What do you want to make your lives better? Then leaders need to find ways to explore how the tacit knowledge of the people themselves can be combined with the insights and experience of experts to design effective programs. As with any product or service, a pilot phase of the program will often be helpful, with rich feedback from users so that the design can be refined and improved before wide-scale implementation. Additional improvements will come from feedback during implementation. And then, at longer intervals, leaders should convene longer conversations: What have we learned? What should we do differently next time?

Making feedback inclusive and equitable is not easy, but it is central to achieving the ideals set forth in the US Declaration of Independence and similar documents from other countries.

It took extraordinary vision to write those documents, and it requires exceptional leadership to manifest that vision, namely that all people are created equal and have basic human rights.

We hope this series has shed some light and provided guidance on how we can be better leaders in this movement. Progress requires new ways of thinking and acting, and the past five years has yielded much new thinking and experimentation in service of genuine inclusion in equity in philanthropy, aid, and government programs. Let’s keep the momentum going.

Dennis co-founded Feedback Labs. He has worked for over 30 years in international aid and philanthropy. He is also co-founder of GlobalGiving, the first global crowdfunding website, where he was CEO from 2000 to 2010. GlobalGiving has mobilized nearly $380 million for 22,000 projects in 170 countries, fueled by hundreds of thousands of individual donors and 285 leading companies and foundations.

From 1986-2000, Dennis was an economist at the World Bank, where he worked in Indonesia, Russia, Papua New Guinea, and Niger on agriculture, housing reform, energy efficiency, structural adjustment, and innovation. His New Products Team created the Innovation and Development Marketplaces in the late 1990s.

Dennis has previously also been a Visiting Scholar at New York University, Visiting Lecturer at Princeton University, Professor of the Practice and Entrepreneur in Residence at UNC-Chapel Hill, Visiting Fellow at the Center for Global Development, and economist at USAID and the Asian Development Bank. He is a graduate of UNC-Chapel Hill, where he was a Morehead Scholar, and of the Woodrow Wilson School at Princeton.