What’s In It for Me?’ – Strengthening Accountability of Companies and Local Government through Citizen Feedback in Mining Areas 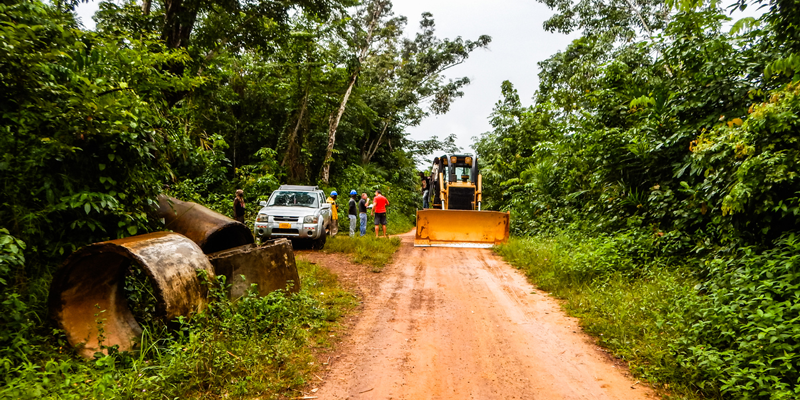 This piece was originally published on GOXI and has been republished here with permission of the author.

Liberia is home to some of Africa’s largest mineral resource deposits such as iron ore, gold and diamonds. Yet decades of poor resource governance have ensured these resources have not contributed to the public good. While the proper management of the country’s mineral wealth has the potential to transform the economy through financing infrastructure development and job creation, systemic problems of transparency and accountability have prevented these outcomes. Channels of communication between decision-makers and citizens are often non-existent or poorly designed, meaning community voices are rarely heard and social contracts outlined in Mineral Development Agreements (MDAs) are rarely enforced.

Long term frustration with exclusion and misuse of power has stoked tensions between community stakeholders in concession areas in Liberia, at times leading to violent conflict. To pilot a new way of dealing with these issues, Accountability Lab Liberia, with support from the Gesellschaft für Internationale Zusammenarbeit (GIZ) and funded by German Development Cooperation launched a community network of Citizen Helpdesks (CHD). The CHDs comprise of Local Mobile Journalists (LMJs) and Community Frontline Associates (CFAs) who collect and share information to initiate feedback loops among citizens, the mining companies and local power-holders.

Deep-rooted issues existed on multiple fronts in Bea Mountain (Bea Mountain Mining Corporation) and Kokoyah (MNG Gold)- both between and among the companies, the government and citizens. Neither the mining companies nor communities trusted one another, and engagement between citizens, the companies and government representatives was non-existent. Violence was frequent, poverty was entrenched and outsiders viewed with suspicion. So where to begin?

To generate buy-in, Accountability Lab Liberia carried out a comprehensive and inclusive stakeholder mapping process that included everyone from village chiefs and youth groups to government officials and concession company staff. Through survey questionnaires, CFAs recorded awareness and understanding of provisions set forth in the Mineral Development Agreements (MDAs) in over 7,500 interviews.

The critical differentiator between running an information campaign (which may have led to greater transparency but not accountability) and a feedback platform (which seeks to ensure accountability) starts with gathering citizens’ questions and identifying information gaps – and then closing these gaps with validated information. 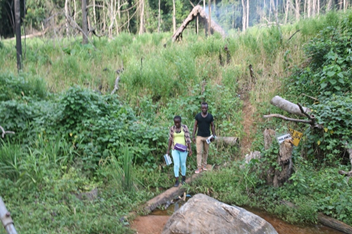 The team faced a number of challenges while collecting data from communities – again, mainly rooted in distrust at the community level. It addressed these trust challenges by ensuring that all the CFAs were recruited directly from the communities- so citizens were familiar with them and their local ties allowed them to understand the validity of information. It gathered information from people in locations where they felt comfortable and not necessarily in formal settings (see picture by Otis Bundor:CHD members visit a farm for awareness raising). Accountability Lab was able to build trust over time through repeated interactions – continually reporting back to communities.

Maintaining impartiality was critical to mediating disputes throughout the project cycle. The Lab worked diligently to debunk suspicions of partiality by promoting transparency within all project activities. Even seemingly small actions, such as hiring CFAs, required the utmost transparency- vacancy notices were posted publicly for anyone to apply and the process was explained clearly.

Misinformation and rumours frequently threatened the validity of information shared through the Helpdesks. To counter this, town hall and smaller interest group meetings as well as a direct SMS/call hotline to the Accountability Lab Liberia team offered citizens multiple platforms to ask questions and fact check in real time. In both concession areas citizens used the hotline to inquire about issues including education, land acquisition, employment, wrongful dismissal and received information on the MDAs in local languages (see picture by Lawrence Yealue: CHD manager presenting simplified MNG Gold MDA to Sayeh Town Chairlady). 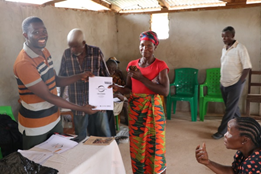 Expectation and boundary setting were important components of the program’s design. Prior to the launch of the project, Accountability Lab Liberia drafted a carefully detailed “Do No Harm” (DNH) document identifying potential dividers and peace-builders in the community. For example, Accountability Lab Liberia realized quickly that it was difficult to recruit women as CFAs but that they were seen as critical to peace. The DNH document had predicated the importance of gender equality throughout- and the team pushed hard to make sure women played a key role in information gathering and dissemination. This contributed to the collection of high quality data and engagement significantly.

Accountability Lab Liberia had to find ways beyond financial remuneration to keep the CFAs motivated. When stressing the importance of supporting their communities, they learned that even in remote parts of Liberia there are energetic young people with integrity, who understand the value of citizen feedback. They are not checking out; they are checking in with their communities to support greater accountability.

Creative communication around the project was essential to keep citizens engaged. Accountability Lab Liberia organized an accountability incubator to bring young people with good ideas into conversations and actions on these issues; Radio DJs used infographics for conversations on air; young musicians in the communities were mobilised through a “rap2rep” music competition (Songs bei Lyrical D); and advocacy films were developed on resource governance issues.

For successful awareness campaigns a communications strategy has to be multi-faceted- bringing together a variety of tools.

This reinforces the messages and further builds trust. As a result, the surveys showed that the understanding of the MDAs among the community rose dramatically from as little as 20% to over 80%. This is directly attributable to the awareness-raising measures.

Finally, managing expectations within the communities is critical. At each step of the project, CFAs reinforced their role as information collectors and connectors instead of problem solvers. It was made clear that the benefit for citizens was the shared basis of understanding and collective ideas for solutions to shared problems – and that those were most effectively addressed by the concession company and community themselves. Over time, this began to happen. For example, the concession company in Bea Mountain made a whole host of changes including cleaning up local water sources, building a health clinic and housing, providing stipends for education and rehabilitating local roads.

At the start of the project in the MNG Gold mining area, there were as many as three violent protests a month. After having engaged the community, this number decreased to just four in total over the course of the year.

Gathering citizen feedback is easy – gathering the right feedback and making sure it is used to inform relevant decisions in the long-run is very difficult, particularly in parts of rural Liberia. Learning how to do this, and how tools like the Citizen Helpdesks can support citizens to address entrenched issues of power, exclusion and poverty is still ongoing. Going forward in Liberia Accountability Lab Liberia and GIZ will continue to find ways to collect information and push those responsible to respond.