What do a soldier, a doctor and a pilot have in common? 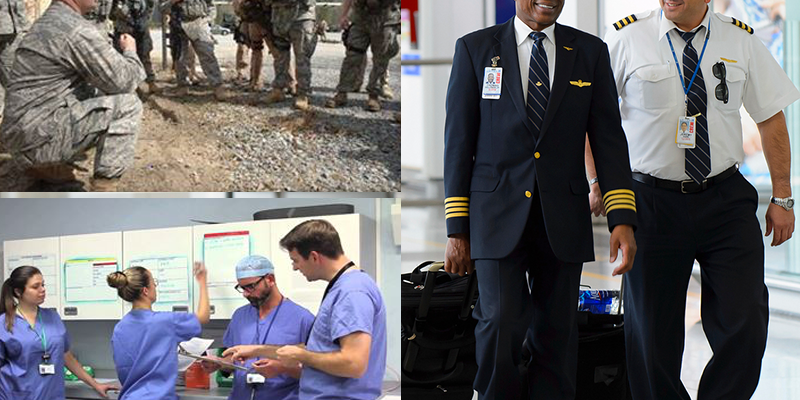 This post was originally published on USAID Learning Lab and is reposted here with permission of the author.

Summer is over. You wrapped up some projects, others are about to pick up, deliverables continue to find their way into your inbox and deadlines relentlessly come at you as you navigate your operational cycle. But think about the months you just left behind and tell me: did you at any point pause and reflect?

We’re constantly in “delivery mode”; coming and going from missions, submitting documents, reacting to client requests, meeting with colleagues… There seems to be no time to catch a breath,no time to connect the dots and learn. Yet, the literature tells us that taking time to reflect on what we’ve done teaches us to do it more effectively the next time around.

In many professions pausing and reflecting is not only considered standard practice but a key to analyze and improve performance.

The US Army’s Opposing Force (OPFOR) has used After Action Reviews (AAR) for over 30 years as a method to jointly reflect, discuss, and extract lessons that can be applied to future missions. OPFOR is a military unit tasked with representing the enemy during trainings and war games (BLUFOR is the name of the “home team” – the force that is being trained). The Army’s After Action Reviews are part of a broader learning cycle that takes place throughout the training campaigns, starting the moment the senior commander drafts operational orders and after each significant event in the training. During these war exercises AARs are used by opposing teams as structured and safe spaces to openly discuss and analyze what happened, why it happened, and how it can be done better. In AARs there’s no rank, no blaming, and no praising. No fear of retaliation. Everyone’s opinion counts and everyone present is expected to be candid, insightful, and creative about past challenges and events.

Hospitals deal with complexity on a daily basis. Whether in the Operating Room or the Intensive Care Unit, teams of surgeons, nurses, anesthesiologists, residents, and many others assemble daily, and work together regardless of whether they have met before. Practices like Morbidity and Mortality Conferences have been in use since the 1900s. In these conferences, specific case studies are presented to residents to jointly identify areas of improvement and discuss medical errors in an open, safe manner. Different types of team debriefings are widely used – either as regular practice or after a critical incident – in recognition of the importance for team members to provide honest feedback and reflect on their recent performance. These debriefings have been linked to increased survival and enhance the learning process in an often chaotic environment.

In the Aviation Industry – as Atul Gawande’s “The Checklist Manifesto” very eloquently exposed – several checklists are routinely used to prevent basic errors and address emergency situations. Although captain and crew always hold an initial brief before the flight, checklists act as a different type of “pause points”. Longer debriefings are a common practice during FAA training and after aircraft accidents, but in-flight checklists are largely geared towards ensuring safety. They often require several crew members, who most likely didn’t know each other before the flight, to interact through the checklist. This quick and continuous “check-in” – informed by the lack of time for extensive debriefs during flight – contributes to constant awareness and reflection.

There are some common characteristics among these “pause and reflect” spaces:

There are also many commonalities between the group dynamics described and the ones we face every day. We’re under pressure to deliver. We work in diverse teams comprised of people we often didn’t know before. We work in a changing environment, without complete information, and we often need to react quickly to what happens around us. But do we have built-in mechanisms, spaces in our project cycle and our daily work to pause and reflect? Do we learn in the way learning is supposed to work? (Check out this video and the interesting work that the WBG’s IEG team are doing)

We surely have similar spaces for discussion. Teams get together for Concept Note Reviews. We have team meetings to listen to our peers’ contributions as they try to help us improve our design. We have implementation reviews and completion reports in which we are supposed to discuss what really happened during implementation and extract lessons that we can apply next time.

We do have those spaces, but I would argue that they are not enough, and for the most part they don’t possess the four characteristics above. The question is: Can we change that? Can we use them better? Safe spaces where we are completely honest about successes and failures not only lead to true learning – one that becomes action – but also connect us to the wealth of talent and experiential knowledge around us. They’re like having coffee with that colleague we trust to ask her for advice – on steroids.

Now think about what it is that all the occupations mentioned have in common. Why has pausing and reflecting become such an integral part of their activities?

Well, if they don’t, people die.

We are not responsible for the lives of others like a doctor, a soldier, or a pilot. But our work affects the livelihoods of thousands, millions of people every year. And that should make us pause and reflect.

Maria del Camino Hurtado is an Operations Officer at the World Bank’s Science of Delivery unit, and a team member of the Global Delivery Initiative’s Secretariat. As you embark on your long weekend, she encourages you to take a minute to think about what stops you from pausing and reflecting more often. Share with us what you learn from that reflection in the comment section below!