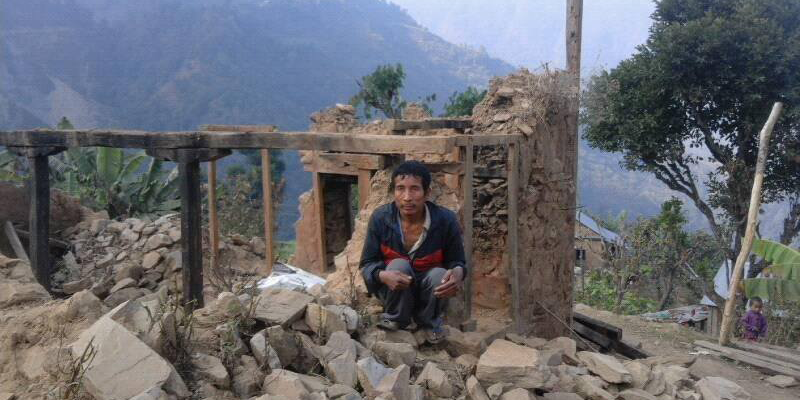 This “Closing the Loop” piece comes from Feedback Labs Collaboration Fund winners. In Fall 2015, Integrity Action, Ground Truth Solutions, Youth Initiatives, Local Interventions Group, and Accountability Lab won US$20,000 to implement and experiment with closing the loop for earthquake victims in Nepal. Here is their mid-term update to help Feedback Labs and its members learn from their efforts.

In April and May 2015 Nepal was struck by 2 earthquakes of 7+ magnitude which devastated the central Asian nation. As well as over 8,000 deaths, 450,000 homes destroyed and 2.8 million people displaced1 , the disaster has also caused immense damage to Nepal’s infrastructure, including communications and transport networks, which has severely impaired access to communities in need which are located in remote areas.

Despite the efforts of over 330 humanitarian agencies2 contributing towards relief efforts, the situation on the ground is dire for many Nepal citizens in need of aid and support. Outside Kathmandu people are often not aware about relief efforts going on where they live, or they feel that efforts are unsatisfactory and are not addressing their basic needs.

Into this context, Youth Initiative Nepal has launched their Youth in Post Disaster Integrity project with support from Integrity Action. This project was co-designed with GroundTruth and AccountabilityLab and funding from the Feedback Labs collaborative. It built upon the work that these organisations have been carrying out in Nepal around citizen feedback on the earthquake response, using local groups of volunteers to track satisfaction with relief efforts in all of the worst affected districts.

This Youth in Post Disaster Integrity project is part of Youth Initiative’s drive to promote citizen engagement in development, particularly through youth inclusion, as well as their combined efforts, with Integrity Action, to implement Community Integrity Building in Nepal. This intervention is pioneering Community Integrity Building (CIB) to provide a feedback loop and solution-focused approach to disaster relief. This is in order to ensure that aid agencies, government and NGOs are more accountable and responsive to citizens who are in need of aid, as well as to support citizen empowerment to monitor aid activities so that ultimately the needs and concerns of citizens are heard and understood, whilst the public is informed about vital aid relief they are entitled to.

The 3 month long pilot was launched in November 2015 targeting relief efforts in Gorkha, Makwanpur, Dhading, Raasuwa and Sindupalchowk districts. Because it is a short pilot, the key goals of the project are to:

If the project ran for longer, we would have been more ambitious with the targets.

To date, twenty community monitors have been trained across the 5 districts where they have been identifying the key failings in the relief efforts by interviewing citizens and monitoring the implementation of aid efforts on the ground. They have made several key findings including:

Findings from monitors are being discussed at Joint Working Groups (collaborative groups where stakeholders work together) and Integrity Hubs. Youth Initiative and the monitors have invited key stakeholders from government, NGOs and communities to gather together and discuss the monitors’ findings and identify and implement solutions to improve relief aid performance in these settings. These have provided a new platform for dialogue and grievance sharing which have been raising awareness about the problems uncovered by the monitors.

The following recommendations made by Youth Initiative’s monitors, based on interviews and focus group discussions with citizens in the effected districts, have been implemented:

Youth Initiative has so far not faced considerable political challenges implementing their project. They have been able to work with NGOs, communities and government representatives. However, there are instances where JWG members in high ranking government positions are not available to attend meetings and do not turn up due to time constraints, made worse by the geographic problems and gaining access to certain areas. To mitigate this challenge, Youth Initiative and monitors have visited important JWG members in local government in places convenient to them so as to ensure their findings are shared with the most important stakeholders.

The logistical problems encountered in getting to the geographical locations in some of the districts have also proved to be a serious challenge for Youth Initiative. Travelling between districts and within districts has proved time consuming for monitors and Youth Initiative staff as well as stakeholders and citizens who are being engaged. This has meant that individuals are sometimes forced to stay overnight for meetings.

Due to the short nature of this project Youth Initiative will face added pressure to ensure that partnerships established over such a short space of time remain durable and open to hearing citizens’ voices. Failure to do so will inhibit their ability to close the loop on problems discovered and to ensure recommendations are implemented.

Stakeholders in local government have been willing to engage with community monitors and are eager to learn about the problems citizens are facing accessing relief. In addition, because monitors have been carefully selected, based on their capacity, time commitments and links to local areas, they have been able to easily build trust and engage with citizens and important local stakeholders. This has enabled them to bring groups together in dialogue to discuss important issues and propose solutions.

The inclusion of journalists and media stakeholders in forums to discuss problems identified by the monitors has proved to be a success, enabling Youth Initiative to gain additional positive media coverage around their project as well as highlighting problems that have been discovered by monitors.

Youth Initiative hopes that by tracking the progress of recommendations made, as well as the commitments from NGOs, government and humanitarian agencies, and following up to ensure they are carried out, they can contribute towards ensuring that aid is reaching the most vulnerable and that the voices of citizens are heard. They hope that by bringing citizens together with key stakeholders in government and aid agencies aid will become more accountable and responsive to the needs of citizens and ultimately improve the lives of those in desperate need as a result of the earthquake in Nepal.