We Need Many Champions to Shift Foundation Listening Practices 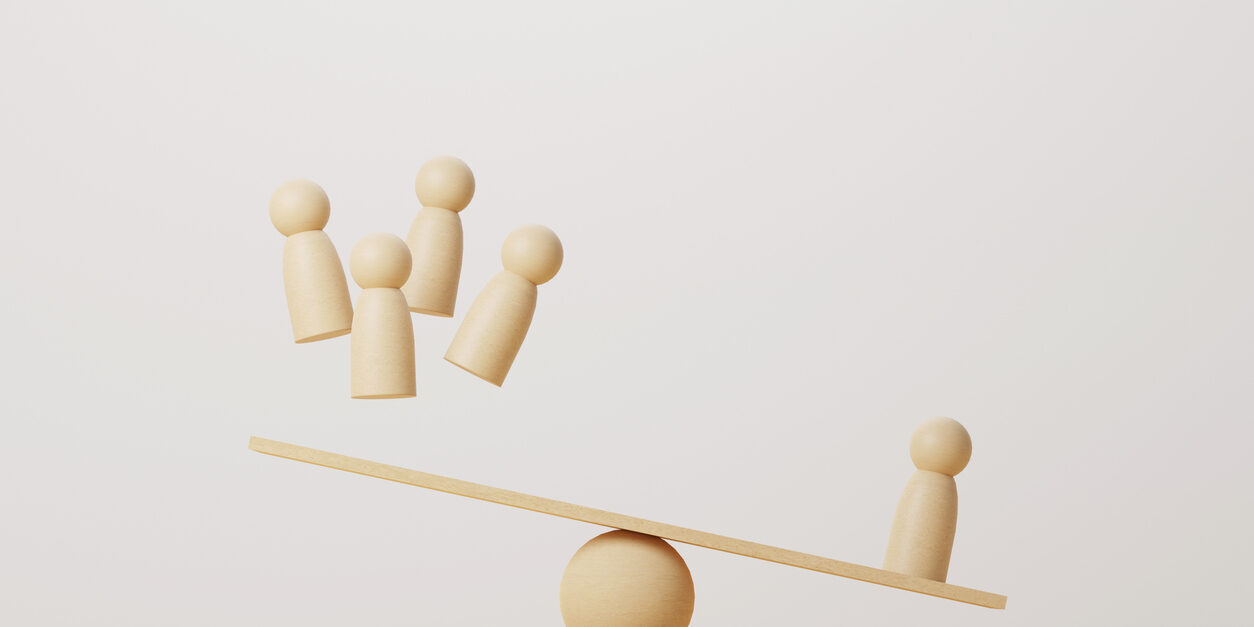 This is the third in a series of posts contributed by the Feedback Incentives Learning Group, a group of funders convened by Feedback Labs that are dedicated to encouraging peer funders to listen to the people most harmed by the systems and structures they seek to change and to supporting their grantees to listen as well. In this blog series, learning group members share their insight into and experiences with encouraging foundations and nonprofits to listen and respond to the people who are most impacted but often least consulted by philanthropy and nonprofits. The first blog in this series is here and the second blog is here. We hope this series provides inspiration and guidance for those looking to listen better and, ultimately, encourages action. This blog was originally posted by the Center for Effective Philanthropy.

Foundation behavior is notoriously hard to change, and foundations are better at getting nonprofits to change than at changing themselves.

In the opening post in this series, several funder colleagues from the Feedback Incentives Learning Group wrote compellingly about the need for funders and nonprofits to re-center their work around the voices and perspectives of the people and communities impacted by their decisions.

In a follow-up post, Megan Campbell and Madison McDaniel of Feedback labs explored the results of a survey of more than 100 foundation representatives and what their responses tell us about how foundations are providing support to help grantees listen.

We’ve seen this borne out in our work at Fund for Shared Insight as nearly 150 funders have supported more than 600 nonprofit partners to participate in Listen4Good, Shared Insight’s signature capacity-building initiative for direct-service nonprofits.

Nonprofits participating in Listen4Good have gained valuable insights into how to change their programs based on feedback from the people who experience them. And the exercise of learning and changing in partnership with program participants has often led to larger shifts in organizational culture — changes that at their best shift power, change systems, and contribute to more equitable outcomes.

The growing number of foundations that are supporting their grantees’ listening work, as illustrated by the survey results and the growth of Listen4Good, does raise a significant question: If listening and feedback are powerful and transformative practices for nonprofits, shouldn’t funders also be listening?

At Shared Insight, our goal has always been to encourage funders — not just nonprofits — to listen to the people and communities most impacted by their decisions. We are enormously encouraged by the growing number of funders of all types that are willing to support their grantee partners to do better listening. And we think that foundations should also be listening.

We’ve been told — and we recognize — that foundations can be large and complex institutions, with programmatic silos that may operate with a great deal of autonomy. Convincing a few people or a single team that listening matters may not lead to organization-wide change.

We’ve also heard that some foundations are reluctant to listen because they’re not sure they’ll be able to act on what they hear. Or because they may hear things that are inconsistent with current funding priorities and strategies. And some funders are rightfully wary of making additional requests of grantees and communities that may exacerbate existing power imbalances or come across as extractive.

These are all real or at least perceived barriers to funder listening. They also reflect and can contribute to persistent inequities.

In addition, although it’s not widely discussed (probably because they are so much better resourced than their nonprofit counterparts), funders do have their own resource and capacity constraints. In my two decades in philanthropy, working with multiple foundations, I’ve noticed that the process of managing applications, conducting site visits, preparing for board meetings, and getting checks in the mail can often take precedence over other work because it involves deadlines and hard deliverables.

Other work, such as listening, can be perceived as extra work — good to do but not core and not the highest priority — an example of how white dominant cultural norms dictate not only what work we do but also how we do it, again both reflecting and contributing to enduring inequities.

It can also be unclear exactly who within a foundation would be responsible for listening: is it part of learning and evaluation, strategy development, or program?

These barriers and challenges illustrate why changing foundation behavior can be so vexing. They also suggest that getting foundations to listen will require cultivating multiple champions, across different functions and at different levels within the foundation, to make listening a priority.

The Feedback Incentives Learning Group survey offers two important clues about how we might do that. In addition to asking funders questions about how they support their grantees to listen, the survey also asked foundations about their own listening practices. The responses, from trustees and staff at all levels of community, family, private, and corporate foundations, offer insights into how to best make the case for foundation listening.

Survey respondents were asked which of the following arguments would be most likely to motivate them to improve their foundation’s listening practices:

Consistently, across all types of foundations, ensuring support aligns with community desires, supporting greater equity, and helping to build community trust were ranked most highly, in that order. Interestingly, however, responses varied by role. Program officers found supporting greater equity the most compelling argument. Respondents who were CEOs or vice presidents ranked ensuring program effectiveness more highly than any other group of respondents (see chart below). The five foundations based outside the United States ranked ensuring program effectiveness as the most convincing rationale.

Ranking of rationales for listening across all survey respondents 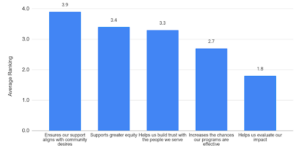 Ranking of rationales for listening by specific respondent roles 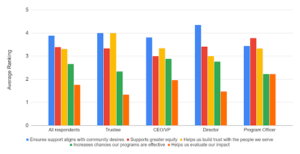 Given the relatively small sample size, it’s perhaps not useful to parse these results further (by type of foundation, for example), but rather to simply conclude that there’s not a single rationale for listening and that different arguments will appeal to different people depending on their role. This is an important consideration given how change actually happens.

Survey respondents were asked to rank, on a scale of 1-5, how much of their foundation’s listening and feedback practices they are able to influence. Perhaps not surprisingly, because most foundations are hierarchical institutions, CEOs and vice presidents ranked their ability as high (average 4.2), followed by directors (3.6) and program officers (3.2). It’s perhaps worth noting that even though the number of respondents is small, grants specialists and measurement, evaluation, and learning specialists ranked their ability to influence higher than any group other than CEOs and vice presidents, offering a counterpoint to the notion that those highest in the hierarchy have the most influence. 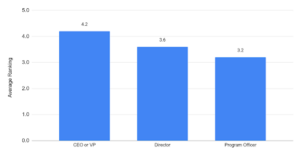 Keeping in mind the small sample size, these results confirm some key assumptions among those who seek to promote listening, such as the importance of winning the support of CEOs and senior leaders. They also illustrate the complexity involved in changing funder behavior. Even when staff at multiple levels are convinced of the importance of listening, they may not feel that they have the ability to influence practice changes. And those who are in the position to influence practice changes may need to hear a variety of arguments to be convinced that change is important.

While not completely surprising, the limited degree to which program officers felt they could influence changes in listening practice does perhaps represent an opportunity to cultivate more champions within foundations and change listening practices across the philanthropic sector. As the front-line workers for most institutions, program officers, in my experience, have a great deal of discretion in how they approach their role.

Most program officers do have the ability to make choices about what questions they ask in meetings, who they meet with, what media they consume, and how they invest their time. Approaching those choices with a listening mindset could create powerful examples and test cases that illustrate the value of listening.

Foundations can be hard to change for a host of reasons, many of which are intertwined with systems and structures that have been designed to benefit some groups and marginalize others. To make listening the norm in philanthropy, we need to muster all our arguments and cultivate champions at a variety of levels across multiple roles.

Along with our colleagues in the Feedback Incentives Learning group, Shared Insight believes that the end goal — philanthropy that is informed and influenced by the opinions, ideas, and aspirations of the people most impacted by its decisions — is more than worth that effort.

Rick Moyers is an independent consultant who serves as communications director for Fund for Shared Insight and is a member of the Feedback Incentives Learning Group. He is also board chair of the Community Foundation of the Central Blue Ridge in Staunton, Virginia. Follow him on Twitter @Rick_Moyers.