Labstorm: Feedback is in the Air 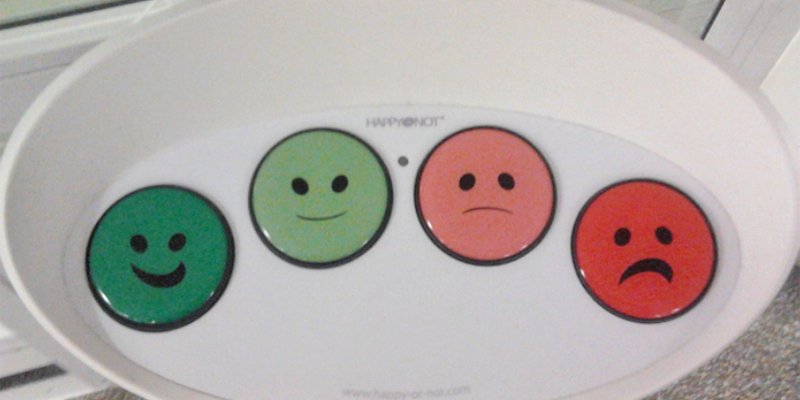 Feedback mechanisms at airport security checkpoints, or the entrance of the World Bank, are inviting. The smiley faces clearly display a range of emotions easy to identify. The buttons themselves are just begging to be pushed. It’s visual. It’s intuitive. But does it effectively close the feedback loop?

At our latest LabStorm, Dieter Zinnbauer of Transparency International examined how to take visual feedback systems a step further. He believes that it’s important to make feedback visible in physical environments. Instead of just asking someone to push a button, wouldn’t it be more powerful if all the collected feedback was shown around the display?

Having a visual, engaging method for collection is the first step to closing a feedback loop. But there’s still a long way to go. Maintaining accountability requires an easy way for individuals who are providing their feedback to understand where it is going and why it’s important. There is empirical evidence that ambient feedback, or feedback that is displayed around people in the physical environment, makes a difference. There is huge potential waiting to be unlocked. Where have we seen ambient feedback succeed? Where else could ambient accountability be useful? LabStorm attendees dove into these questions and came up with three basic principles:

We are excited to collaborate with Dieter Zinnbauer on experiments with ambient feedback. If you’d like to learn more from Dieter and more examples of ambient accountability, visit his blog ambient-accountability.org. Want to stay involved? Reach out to us at [email protected] or contribute your thoughts below.

Dr. Dieter Zinnbauer joined Transparency International in March 2007. He has served as Chief Editor of the Global Corruption Report until February 2009 and now co-ordinates TI’s work on emerging policy issues. Prior to joining TI Dieter worked as policy analyst and research co-ordinator for a variety of organisations in the field of development, democratization and technology policy, including UNDP, UNDESA, and the European Commission. Dieter has an MSc in Economics from the University of Regensburg, Germany, a PhD in Development Studies from the London School of Economics and has held post doctorate fellowship positions with the Carnegie Council on Ethics and International Affairs, Oxford University, the US Social Science Research Council, the London School of Economics and most recently (2014) the Edmond J. Safra Center for Ethics at Harvard Law School.