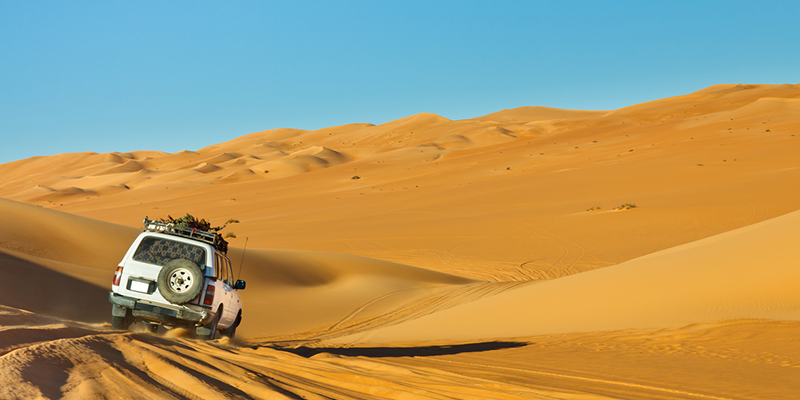 “It was so successful and yet so not successful, I had to do it again.” ~Tony Tether, former Director of DARPA

Fifteen self-driving vehicles assembled in the Mojave Desert, competing to win $1 million dollars. All they have to do is be the first driverless car to conquer a rugged 142-mile course. The most successful vehicle makes it just under 8 miles before stranding itself on a cliff and catching fire. Another makes a U-turn after 20 feet and decides (on its own) to head back to the start line. One gets stuck between two tumbleweeds, and several barely make it off the start line. The Director of DARPA declares the results such a success that he vows to launch a second challenge with double the prize money, $2 million dollars. Wait, what?

That’s the story of the DARPA Grand Challenge, launched by the Pentagon’s Defense Advanced Research Projects Agency (DARPA) in 2003. Wired magazine describes the saga in an oral history in this month’s issue. “The grounds surrounding the bar teemed with sweaty, stressed, sleep-deprived geeks, desperately tinkering with their motley assortment of driverless Frankencars.” It’s a good read.

I love the story for three reasons. First, because unlike the grand challenges I’ve encountered in aid and philanthropy, no one needed to submit a project proposal for approval and funding in order to compete. Participants weren’t vetted and selected based on their credentials and expertise. Quite the opposite – some teams comprised high-schoolers and hobbyists working out of their garages. Basically, they showed up. They opted in. Their tenacity, ingenuity and problem-solving ability got them to the start line in the Mojave Desert, not a 3-year plan and reasonable budget. Those were their qualifications.

Second, Tony Tether, then-Director of DARPA, didn’t care that none of the cars come close to crossing the finish line. He cared that, in trying, they pushed the boundaries of what was possible in a big way. Frustrated with the incremental progress being made by the experts and contractors, DARPA looked outside the circle of professional experts for their big leap forward.

“They were all newcomers, and the innovation doesn’t come from the core of the field itself but from the outside. The experts are usually the lowest performers, because they’re totally bound in their way of thinking” said Sebastian Thrun, former head of Google’s self-driving car project.

The excellent Twitter and Tear Gas by Zeynep Tufecki has been making the rounds of the Feedback Labs office. In the book, Zeynep describes network internalities as the capabilities that social movements develop when their members carry out challenging tasks that require them to make decisions as a collective. Sure it might be hard to figure out how to work with others to design, print and distribute thousands of flyers, and it might seem easier to post something individually on Facebook, but the former act builds capability in the movement, like muscle, far more than the latter. Those capabilities are essential for social movements to be able to adapt and respond to challenges down the line.

Many of the story-tellers in the DARPA Grand Challenge oral history note the ‘incredible sense of camaraderie’ as well as the tangible technical innovations that resulted from people working together toward a shared and (almost impossible) goal.

The challenge seemed to successfully strengthen the internal capabilities in an entire field, by spurring teams to take on unprecedented challenges, in the same way that Tufecki argues that collectively taking on challenging tasks strengthens entire movements.

There’s a lot to be learned there for those of us in aid, philanthropy and governance who are trying to work more adaptively and responsively. How do we balance expertise with decentralized innovation? How do we build the capabilities as a collective that will enable us to adapt and sustain change long-term? Mercy Corps has released a neat interactive diagram that describes how they’ve found that balance. The diagram helps you explore Mercy Corps’s non-linear organizational evolution over the past few years, and how different changes to the way Mercy Corps does business interact to enable the whole organization to be more agile. How do you do it?