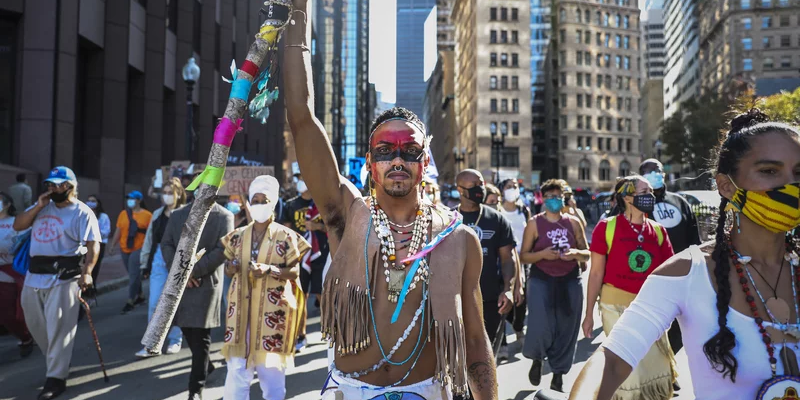 Here at Feedback Labs in Washington, D.C., we work on the traditional land of the Nacotchtank (nuh-cautch-tank) (Anacostan) and Piscataway (/pɪsˈkætəˌweɪ/) people.

The Nacotchtank are an indigenous Algonquian people who lived in the area of what is now Washington, D.C. during the 17th century. The Nacotchtank village was situated within the modern borders of the District of Columbia along the intersection of two major rivers— the Potomac and the Anacostia.

We partially closed our offices today in honor of Indigenous People’s Day to give our staff and members time to reflect, learn more about the holiday, and research some organizations that serve Indigenous communities. The United States and most other countries share a history of colonialism and cultural erasure that has silenced the voice and rights of native people. Even in 2021, we continue to learn about the horrors native families experienced losing their children through the residential school scheme that continued into the mid-1990s.  Mass graves are still being unearthed in the U.S. and Canada.

This year marks the first time a U.S. president has officially recognized Indigenous Peoples’ Day with President Biden proclaiming on Friday to observe this Oct. 11 as a day to honor “Native Americans, their resilience and their contributions to American society throughout history, even as they faced assimilation, discrimination and genocide spanning generations.” The move shifts focus from Columbus Day, the federal holiday celebrating Christopher Columbus, which shares the same date as Indigenous Peoples’ Day this year.

What is Indigenous Peoples’ Day?

Indigenous Peoples’ Day advocates say the recognition helps correct a “whitewashed” American history that has glorified Europeans like Italian explorer Christopher Columbus who have committed violence against Indigenous communities. Native Americans had long criticized Columbus’ legacy’s inaccuracies and harmful narratives that credited him with his “discovery” of the Americas when Indigenous people were there first.

Indigenous peoples first proposed a holiday at a United Nations conference in 1977 held to address discrimination against Natives. South Dakota became the first state to replace Columbus Day with Indigenous Peoples Day in 1989, officially celebrating it the following year, and several cities and states have followed. Last week, Boston joined Arizona, Oregon, Texas, Louisiana, Washington, D.C., and several other states, formally dedicating a second Monday in October to Indigenous Peoples’ Day. Native Americans have borne the brunt of the work to make that happen.

Many state and local governments have gone a step further. More than a dozen states and well over 100 cities celebrate the day, with many of them having altogether dropped the holiday honoring Columbus to replace it with Indigenous Peoples’ Day.

What about Columbus Day?

Columbus Day is a U.S. holiday that commemorates the landing of Christopher Columbus in the Americas in 1492, and Columbus Day 2021 occurs on Monday, October 11. It was unofficially celebrated in several cities and states as early as the 18th century but did not become a federal holiday until 1937. For many, the holiday is a way of both honoring Columbus’ achievements and celebrating Italian-American heritage. But throughout its history, Columbus Day and the man who inspired it have generated controversy. Many alternatives to the holiday have been proposed since the 1970s including Indigenous Peoples’ Day, now celebrated in many U.S. states and cities.

As an organization working to shift power in nonprofits, aid, and philanthropy, we want to acknowledge this power imbalance so deeply rooted in the land we work on. We encourage you to reflect on what land acknowledgment means for your organization and consider researching the native people who once, and hopefully still, call the land where you live and work their home. The native-land.ca interactive map is a great resource to start your research, though this map is North America-centric and only includes some tribal lands.

Whether you are working or your organization is closed today for Columbus Day or Indigenous People’s Day, we encourage you to take some time to educate yourself on how we can all learn from the past. If you need any guidance, here is a helpful starting point and a ton of resources.