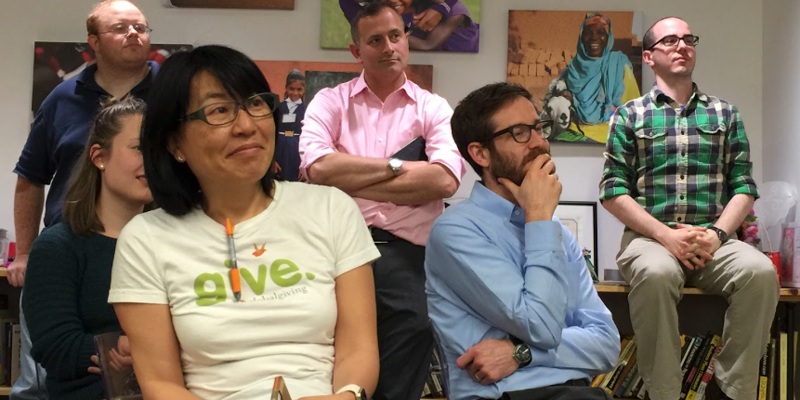 Mari Kuraishi announced recently that she will be stepping down as chief executive of GlobalGiving, where she has spent the last 18 years of her career.

This is almost as emotional for me as it is for her. Not only was I her co-founder when we launched GlobalGiving in 2002, but we also got married four years later.

Why did we decide to leave our high-flying jobs at the World Bank to start GlobalGiving? The Harvard Business Review published a piece with lots of good background, but it all boiled down to this: Mari and I were unwittingly thrown together into a situation where we (accidentally) gained a couple of insights about a possible new way to fund development projects, and we said to each other, “What the heck – life is short; let’s go for it.”

And so we launched what became the world’s first global crowdfunding platform. We weren’t exactly sure what to call it at first, because the word “crowdfunding” had not even appeared in print. And we had no experience founding a startup or running a tech-based platform (the web itself was barely a decade old). Yet we decided to go for it, and though the first few years were humbling, GlobalGiving gradually got traction and today it has helped nearly 20,000 community-based projects in 170 countries raise hundreds of millions of dollars.

GlobalGiving allows any bona fide community organization in the world to post a project designed to make their world a better place.

There’s no guarantee the project will be funded, but the GlobalGiving breakthrough was providing a platform for them to have their voice heard. An unexpected side-benefit has been to allow donors of all sizes to have their voices heard as well – no longer do small (or even large) donors need a fully staffed foundation to do due diligence, make fast, secure disbursements, and monitor progress on projects almost anywhere in the world.

Hundreds of thousands of individual donors, as well as many leading companies and foundations, now use the platform.

Along the way, GlobalGiving has had to innovate in many dimensions, some of which are radical but “under the hood” efficiencies and some of which are user-facing (the ability to get detailed reports and provide feedback across the world). A number of these innovations will provide the foundation for the next leader to take GlobalGiving to $1 billion and beyond – they already inspired the creation of Feedback Labs, and they may even create the kernel of a new operating system for aid and philanthropy.

As I look back, three things leap out as me as key ingredients of GlobalGiving’s success:

First, putting the people we seek to serve front and center of what we do. This seems like common sense, but it was radical at the time, and we built GlobalGiving ground-up to let the people themselves have the primary voice in what happens in their communities.

Second, a spectacular team is the secret sauce to breakthroughs. We faced many obstacles along the way, and it is usually the team rather than the founders who not only solve problems but have radical insights about new innovations.

And third, it’s all about the network – not just the organization. GlobalGiving can serve so many people in so many countries so effectively because of the relationships it has built with thousands of organizations around the world.

Whoever is lucky enough to become the next CEO of GlobalGiving will inherit an awesome team, a tremendous network, a fabulous board, and all the ingredients required for another fundamental innovation in the aid and philanthropy world. Someone who merely wants to be a steward need not apply. GlobalGiving is looking for a high-flyer who says to herself of himself: “What the heck – life is short; I am going for it.”